Chicken skin has been a big no no in my diet since I can remember. Occasionally, I will have a nibble on a small piece here and there – but that’s probably as much as I’ll have. I also don’t eat KFC that often, but when I do, I peel all the skin off too. I know, it is the best part – but I can’t stomach the idea of so much grease going in my body with each mouthful.

At home, we have Hainanese Chicken almost once a week. And, as you know, with whole boiled chicken, there is always lots of skin which I duly remove every time. It’s almost a shame to discard the skin in this dish because it’s usually so silky and has a wonderful texture – but again, I can’t stomach the idea of all that fat going in my mouth. That’s not to say though that I don’t enjoy it however. In fact I love chicken skin – just the rendered variety – where I know that most of the fats have melted away, leaving behind a thin sheet of delicious, crispy, fragrant skin – what I would call a delicious compromise.

So I have learned now not to waste any bit of skin I peel off my chicken pieces – but turn them into these little morsels of flavour. I usually just scatter them on top of my rice and eat a bit with every mouthful – it adds another lovely flavour component – especially as a garnish. It’s so easy – and the best part is that it’s non greasy.

Well, here I have the skin of about 6 pieces of chicken that I have peeled off, meat jelly and all.

I then place them in a small, non stick pan that has a matching lid. I also don’t add any oil.

They are then placed on a low heat where the fats all render out and the skins start to sizzle. I leave the lid on but keep it ajar to let any steam out – allowing them to crisp up. I’ve just taken the lid off here to take photos. 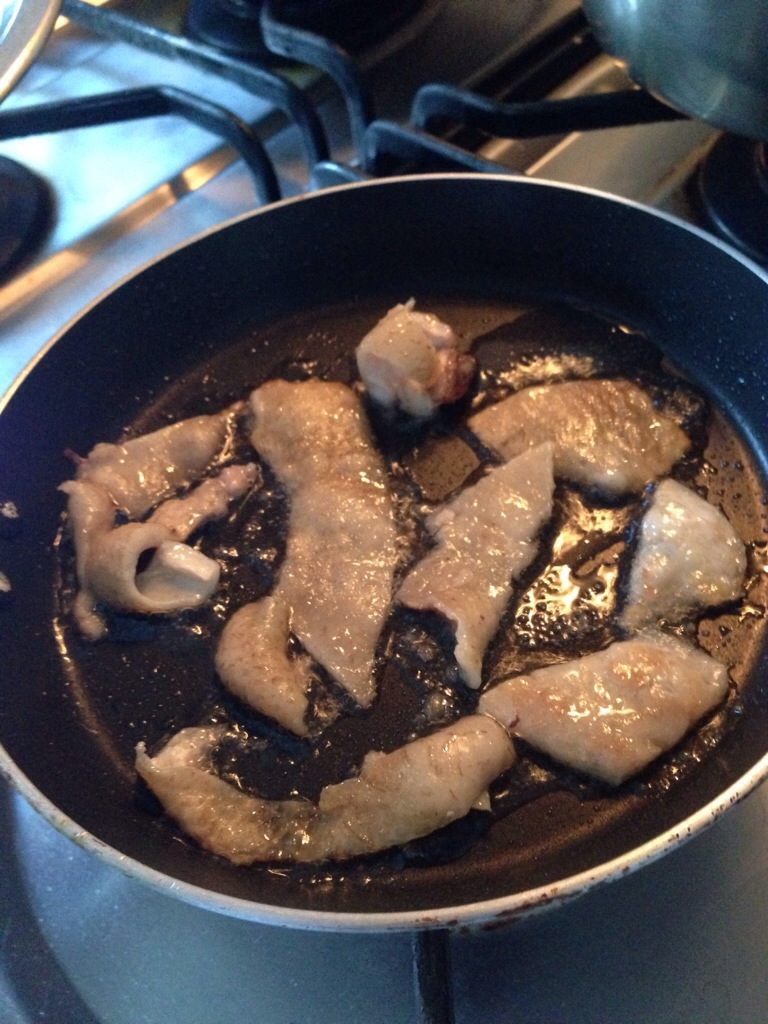 They will start to sizzle and pop, that’s where the lid comes in handy. Check them every so often and if they get really brown, simply turn the pieces so the top side can cook too. Very soon they will start to colour. When they become nice and brown and any trace of white skin has disappeared, fish them out and put them on a piece of kitchen paper to absorb the oil. They will come out quite soft, but very quickly harden up and becomes super crispy.

You can see here the excess oil – and that’s purely from 6 small pieces of chicken. I measured it to be just under a tablespoons worth. And that’s why I don’t eat the skin as it is.

Hope you try it too! It’s great.

One thought on “Fried Chicken Skin – A delicious compromise”